US City and State Nicknames & Slogans: from Bizarre to Formal 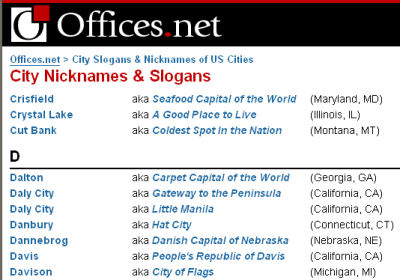 Whether inspired by famous movies or celebrity quotations, city nicknames and slogans are a fantastic and informative way to introduce your city to a complete stranger. We all know that what happens in Las Vegas, stays in Las Vegas, but what about other locations across the States?

Offices.net has compiled a list of city nicknames and slogans to try shed some light over the historic, social, cultural and – sometimes criminal – situation of each and every state, as well as most of the cities.

The list of official and un-official state nicknames and taglines shows how over time certain things started to be associated with particular states, became inseparable and widely used, and in many cases treated as the -state surname-.

If you happen to know of a state motto or a city moniker that we haven’t included in the resource, please get in touch. Your contribution will be greatly appreciated. END_OF_DOCUMENT_TOKEN_TO_BE_REPLACED