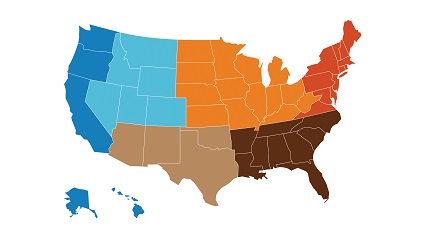 Sioux Falls, South Dakota
The same ranking found that Sioux Falls was the sixth best city to start a business in the US. With a growing population, the city also ranked second in terms of the best business environment in the United States. It was also named as the next big boom town by The Atlantic in 2013. The largest city in South Dakota, Sioux Falls is a diverse economic center focused on financial services, health care and retail. Sitting on the crossroads of interstates 90 and 29, the city is within a day’s drive from many major cities in the Midwest. The lack of a state corporate tax has helped attract a number of financial companies to Sioux Falls, including Wells Fargo and Citigroup.

Fort Wayne, Indiana
Ranked tenth in terms of access to resources and eleventh overall, Fort Wayne is the third best city in the Midwest to start a business according to WalletHub. The second largest city in Indiana, Fort Wayne has received the All America City Award three times because of its high quality of live and low cost of living. The city is also strategically located close to major Midwestern markets, including Chicago, Cincinnati and Detroit. This helps make it a significant transportation and communications hub, as well as a key incubator for new businesses in Indiana’s northeast. Once part of the Rust Belt and a major manufacturing center, the local economy is now largely based on distribution, transportation and logistics, healthcare, and financial, professional and business services

Wichita, Kansas
Wichita, Kansas, comes in as the fourth best city to start a business in the Midwest. The city ranked 16th nationally according to WalletHub’s 2015 study, although it placed eight in terms of access to essential resources for start-ups. The largest city in Kansas, Wichita traces its roots as a trading post in the 1860s. During the 1920s and 1930s, the city became renowned for its place in aviation history as a major aircraft manufacturing hub. It continues to be a major industrial center, although it is also a regional center for culture and trade. In addition to manufacturing, major sectors include health care and natural resources thanks to the discovery of oil in the region during the early twentieth century.

Columbus, Ohio
Columbus Ohio placed thirteenth in the rankings of best cities to start of business in 2015. The same ranking recognized Columbus as one of the top 20 business-friendly environments in the country. The city also ranked among the 50 best cities in America by BusinessWeek in 2012, and was named as one of the top cities for businesses by Forbes in 2013. It was also recognized as the best up-and-coming tech city by Forbes in 2008. The capital of Ohio, Columbus is also largest city in the state. Named after Christopher Columbus, the city has a diverse economy based on a number of sectors ranging from education and health care to insurance and banking. Other key sectors include aviation, defense, fashion and clothes manufacturing, retail, energy, steel, technology, government, logistics, and hospitality.

Grand Rapids, Michigan
Rounding out the top Midwestern cities to start a new business is Grand Rapids, the second largest city in Michigan. Nationally, the city ranked 17th in 2015 according to study. The city was also named as the most sustainable mid-size city in the country by the U.S. Chamber of Commerce Civic Leadership Center in 2010. Home of President Gerald Ford, Grand Rapids was historically a furniture manufacturing center. Nicknamed the Furniture City, it remains home to some of the world’s largest office furniture makers. Also known as the River City, the local economic is diverse and includes activity in health care, information technology, automotive, aviation and consumer goods manufacturing sectors.

This entry was posted on Tuesday, October 6th, 2015 at 9:15 pm and is filed under Best Cities for Business in the USA, Business Spotlights, Cities & States, Trends and Statistics.