Archive for the ‘Office Relations’ Category

The Great Resignation or the Great Retention? How Employers Yield the Power Heading into 2022 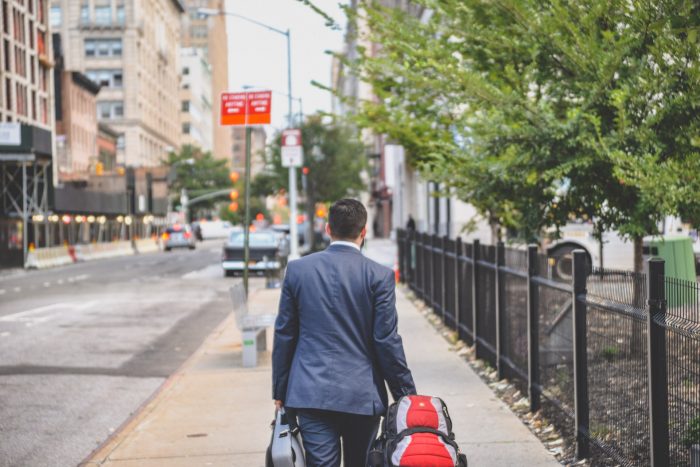 In September 2021, 4.4 million Americans quit their jobs. This staggering statistic, combined with the fact that one in four workers had already left a job in the last 12 months, illustrates the clear reality that workers are resigning at significantly higher rates than prior to the COVID-19 pandemic. Despite the turmoil the pandemic has brought to the United States economy, workers seem more willing than ever to pivot careers and quit their jobs.

Origins of the Great Resignation

In the 20 years prior to February 2021, the resignation rate in the United States had never surpassed 2.4% in any given month. However, around a year into the COVID-19 pandemic, this changed. Typically, resignation rates are seen to decrease during periods of high unemployment, as was seen in the immediate wake of the pandemic and the uncertainty it generated. More recently, experts have discussed the so-called ‘Great Resignation’, a phrase that is linked to the recent shift that has seen employees leaving their jobs to explore other options.

END_OF_DOCUMENT_TOKEN_TO_BE_REPLACED 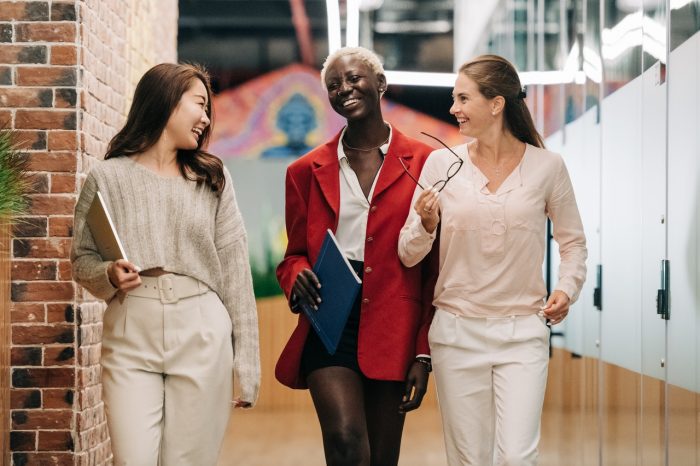 Eight hours per day, 4 or 5 days per week: the average office worker spends tens of thousands of hours at work over the course of their career.

In our last blog post, we covered 5 ways to create a great office culture. Today, we’re building on these ideas and exploring some of the important steps that businesses can take to create a healthy and productive working environment for this culture to thrive in.

Because of the significant amount of time that people spend at work, employers have a duty of care towards their staff. Among other things, this entails going the extra mile to create the healthiest possible workplace environment. Here are some tips to help employers build a more productive work environment.

Health isn’t just physical; it has psychological components too. A holistic approach to health in the workplace means paying attention to:

END_OF_DOCUMENT_TOKEN_TO_BE_REPLACED 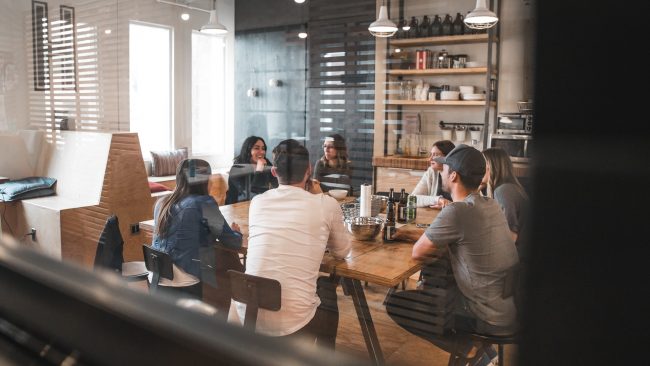 There’s no doubt that a healthy organizational culture is one of the greatest assets any company could have. Employee engagement, motivation, retention, and talent attraction are greatly influenced by company culture.

But culture can be an abstract concept. How exactly can a healthy corporate culture be cultivated in an office environment? In this article we’ll look into five ways you can do so.

END_OF_DOCUMENT_TOKEN_TO_BE_REPLACED 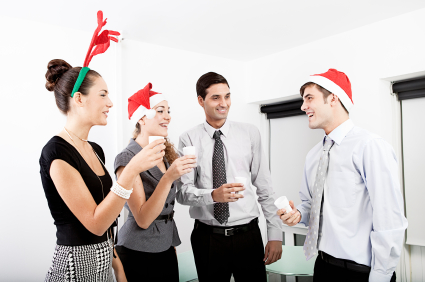 Appetizer-Only Party
Similar to a Holiday Party where folks bring festive cookies or a main dish for the potluck, you can hold an appetizer-only potluck. Simply invite people to bring their favorite holiday appetizer. The office can provide soft drinks, bottled water or coffee. Of course, cookies are allowed and always welcomed! But mostly, this is an appetizer-only party simply to try something new for the holidays. Don’t forget the decorations!

Christmas Classic Movie Marathon
For this type of office party, try a Christmas Classic Movie Marathon. Mix it up with a few movies from different decades like Christmas Vacation, A Christmas Story, Elf, White Christmas, Ernest Saves Christmas or Four Christmases. Provide a place with a viewing screen so folks can pop in and out while they’re working, and if possible, provide popcorn and other snacks, or have a potluck. If a work day party is not possible, try to schedule something off work hours at someone’s house. The point is to have fun.

Pet Holiday Photo Contest
Because cats, dogs, bunnies and other pets look adorable dressed as Santa, angels, elves, reindeer and the like, why not throw a party with a contest for folks who share photos of their beloved family pets dressed in holiday getups? Imagine a bunch of grown ups gathering to show off their puppies and kitties? If you’re so inclined, you could set up a screen in a viewing room so people can vote live from Facebook or Flickr. The prizes can be very simple, like cat toys or a dog bone or gift certificates. END_OF_DOCUMENT_TOKEN_TO_BE_REPLACED 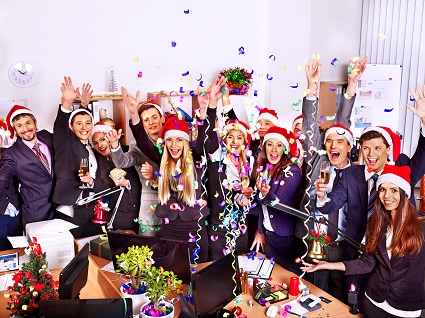 The office Christmas party is coming up and you want to have a good time, but you do not want to do something that you could regret. When the good times start to roll, it can be difficult to remember that you have to work with just about everyone at the office Christmas party and you will see them all year long. It can also be difficult to censor your language around your boss and his family.

The best way to have fun at the office Christmas party and still retain your dignity, and your job, is to have a plan in place before you head out to have fun. With a little preparation and planning, you can have a great time and be the life of the party without doing anything you would regret.

Eat Before You Head Out

If there will be alcohol served at the office Christmas party and you plan on enjoying a few cocktails, then eat before you head out to reduce the effects of the alcohol. If you eat a full meal with breads and meats, then you will have plenty in your stomach to absorb the alcohol you consume.

When you are at the party, you should have a few appetizers before you drink to add to your food buffer. Avoid eating to the point where you feel stuffed, but eat enough to help you control the effects of drinking.
END_OF_DOCUMENT_TOKEN_TO_BE_REPLACED

Getting Ahead: How to get that office promotion

No one wants to just tread water for their entire career. Doing “just enough” to get by at work doesn’t just hurt your career, it hurts you personally. After all, the amount of money you make can directly influence your quality of life. If you are unwilling to put in the work it takes to get ahead, then you can more or less expect to be unsuccessful forever.

There is a lot of politicking that goes into pushing your career ahead at an office. Any job that requires you to stay in a confined space with other people for hours a day will have this trait. However, this doesn’t mean that the average person can just talk their way into a great promotion. In the few cases where this is possible, you probably wouldn’t even want the job in the first place. END_OF_DOCUMENT_TOKEN_TO_BE_REPLACED

The Top Ten Companies to Work for in Washington DC

Amtrak
Headquartered in Washington, DC, Amtrak is a government-owned corporation that has been providing interstate train travel since 1971. Amtrak is actually the DBA of the National Railroad Passenger Corporation, and it employs 20,000 people throughout the United States and Canada. Amtrak serves over 30 million people on 21,200 miles of track.

AES Corporation
AES is an electrical power utility that both generates and distributes electrical power throughout the world. It is a Fortune 200 company that provides electrical power to over 27 countries, and maintains holdings in most of these companies to help generate that power. Their revenue was over $16 billion in 2010, and resulted mostly from their utilities division. They maintain a workforce of 28,000 employees worldwide.

Kiplinger
Kiplinger, established in Washington DC, specializes in producing business forecasts in a number of different industries. It helps its clients by creating a financial prospectus that takes into account all of the different variables of their respective industries, while projecting possible gains due to certain strategies. In 2007-8, Ethisphere magazine named Kiplinger one of the most ethical companies in America, solidifying its reputation for a very high standard of ethics.

Capital One
Capital One is one of the largest bank holding companies in the United States. They operate a number of different lending programs, and are most well known for their credit card products. Capital One employs almost 28,000 people around the world, and has posted revenues of $16 billion for the year 2010. It is the fourth largest client of the United States Postal Service, and sponsors a number of professional and amateur sports teams. They generally sponsor college football, European soccer, and Canadian curling events.

Fannie Mae
Fannie Mae is the common name of the Federal National Mortgage Association. It was created in 1938 as part of the New Deal during the Great Depression. It had a profit of $14 billion for the year 2010, even after a significant restructuring of the business following the economic collapse of the first decade of the new millennium.

Freddie Mac
Freddie Mac is a publicly sponsored government entity that deals in secondary mortgage bundling. After a significant restructuring after the housing collapse of 2008, Freddie Mac has been turned into a more well-functioning entity that has become more financially viable. They posted revenues of $14 billion in 2010, and employ 5,300 people.

Gannett Company is the largest US newspaper publisher, with such major national holdings as USA Today and USA Weekend. It was started in 1906 in Rochester, NY by Frank Gannett, and has developed into one of the most financially viable print companies in the United States. It posted revenues of more than $5 billion in 2010, and has been pioneering the move toward digital media with the downturn of traditional print media. Gannett employs more than 32,000 people.

General Dynamics is a United States defense conglomerate that is headquartered in West Falls Church. During the cold war, the company was highly involved with the development of defense technologies, but has diversified after the fall of the Iron Curtain. They posted revenues of nearly $32 billion in 2010, and it employs over 91,000 people over four major aspects of their business.

Interstate Hotels and Resorts
Interstate Hotels and Resorts is one of the largest hospitality companies in the entire country, with locations scattered throughout the United States, Canada, and 6 other countries throughout the world. They specialize in running up-scale businesses such as resorts and high-class hotels. They are a subsidiary company of the Thayer Lodging Group, which is based in Maryland. They are well known throughout the world as a holder of many reputable brands. 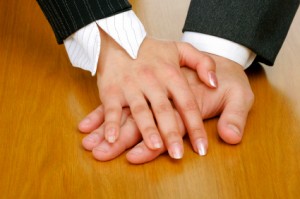 Dating in the workplace can be a dangerous sport, if all goes well and you end up marrying the person then good for you. It can be much easier to get to know someone at work, you spend so much time together already, you have plenty of common ground and shared interests.

If you end up with a nasty breakup and you still have to see the person sitting across from you everyday then it’s another matter altogether.

One survey says 40% of workers succumb to office romances. You need to be aware of the pitfalls before making the decision, especially if your company has a policy forbidding dating.

END_OF_DOCUMENT_TOKEN_TO_BE_REPLACED

Christmas Party Tips for the Office 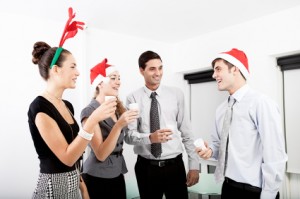 Christmas brings with it much fun and frivolity, celebration and festivities. While the office Xmas party is a time to let your hair down and have a few drinks with your colleagues, you must remember that you still have to work there in the morning, so you don’t want to behave in a way that could embarrass you later. Dancing on the tables may seem like a great idea at the time, but you could end up shamefaced the next day, especially in this whole new world of social networking sites. Within hours your antics could be uploaded to Facebook and spread far and wide. END_OF_DOCUMENT_TOKEN_TO_BE_REPLACED 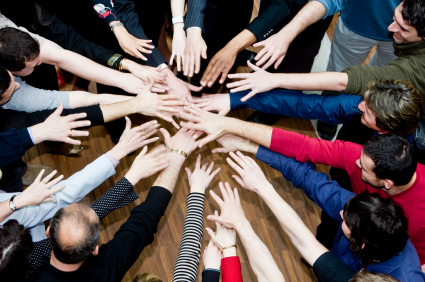 Working as a team is essential to the overall success of you businesses and developing an effective teamwork structure within your organization takes understanding and experience. Belonging to a team and contributing to the ‘whole’ produces far greater results than everyone going it alone and will improve motivation and communication. Each individual has a particular job within group, but you are all striving for the same goals and the same overall objectives, so being able to see the bigger picture is very important.