How to get Give n Take in a meeting 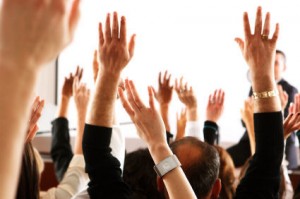 It can be difficult to get audience participation during a meeting. How many meetings have you been to where the chairperson asks a question only to be met by deafening silence? – Cue the tumbleweed. There are lots of reasons for this, from fear of saying the wrong thing, to genuine shyness to people just not listening. Getting people to contribute is important, you need fresh ideas, opinions or just to make sure your audience understands what the key issues are.

* If you know someone is a bit of a shy mouse, don’t make them feel like they are in the spotlight by singling them out. Ask a few people direct questions, so no one feels like they are alone in the firing line.

* If anyone becomes aggressive, argumentative or critical when someone else voices an opinion, make sure you diffuse the situation as quickly as possible and get back on topic.

* Being friendly and accessible will make it easier for people to join in the discussion, if they know they won’t get criticized or embarrassed in public they are more likely to voice their opinions and ideas.

* Another way to encourage participation is to arrange beforehand for someone you know well to chip in at strategic points in the meeting. Most people dread being the first one to voice an opinion but are happy to join in if someone else already has.

* After the meeting report back to people about how their ideas were implemented. Knowing they made a difference (even if it’s tiny) will have a huge impact on the level of enthusiastic response you get at your next meeting.

This entry was posted on Tuesday, October 14th, 2008 at 2:01 pm and is filed under Business Advice, Meetings, Office Etiquette.