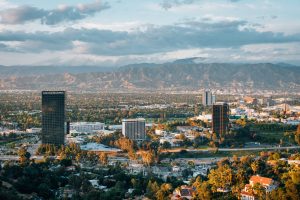 With an active workforce of nearly 5 million and the highest number of PhD graduates of all US states, LA County benefits from a diverse talent pool and from several partnership schemes between universities and the county’s Economic Development Corporation. In addition, the Los Angeles County Workforce Development Plan was approved to ensure all businesses have access to skilled employees and boost strategic business engagement, particularly in designated priority growth sectors like construction, advanced manufacturing, entertainment, infotech, trade and logistics, and hospitality. For information on business support, get in touch with the LA County Office Of Small Business.

Approximately 25 percent of California’s population live in LA County, providing local businesses with easy access to a large consumer market. The county is also known for its business diversity and has more female and minority-owned businesses than any other state.

The office market is divided into five sub-markets: Central, East, West, North and South. The Central and Southern areas of the county have the highest concentration of office inventory, since this is where the largest sub-markets (Los Angeles city, Tri-Cities, and South Bay) are located.

The sheer size of the creative and high-tech sectors fuels demand across the county for both conventional space and shared / flexible premises which suit the growing number of contractors, freelancers, and self-employed professionals. Space in the county’s CBDs is dominated by insurance, finance, and real estate companies, which show a preference for conventional office space. Further expansion is planned in areas like Venice, Santa Monica, and Playa Vista.

The county’s prosperous economy sustains the growth of the office market, as evidenced by key indicators like leasing activity levels and vacancy rates, which are below 14 percent. Particularly buoyant markets within the county include Silicon Beach, Westside, and Hollywood, with over 1 million square feet under construction. County-wide, rents average $38 / sq. ft. / year, and are expected to continue a slow but steady climb in the near future.

This entry was posted on Monday, April 6th, 2020 at 2:21 am and is filed under Business Districts, Business Spotlights, California, Los Angeles, Office Space Forecasts and Trends.