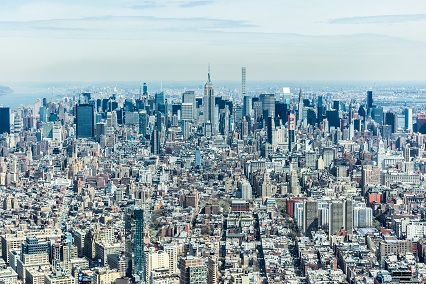 Mid-sized markets were among the best performers in the year that has just ended. Portland, Nashville, Salt Lake City, and San Antonio were characterized by occupancy increases that averaged 3 per cent. In San Francisco, market indicators were also positive despite the fact that occupancy growth levels dropped from 2.9 to 1.1 per cent. Other regional office markets that did well included Austin, Silicon Valley, and Seattle. In these markets, occupancy growth averaged 2 per cent.

Rental value growth varied from city to city but could be summarized as follows:

Market analysts seem to agree that the USA office market is expected to witness incremental growth during 2017. Growth will be underpinned by increased consumer confidence (currently at a 13-year high) and the stronger value of the US dollar.

Demand for large office units is expected to recover over the course of the year, and this will be complemented by the strong performance of the construction sector given that over the next 12 months, more than 110 million square feet of office space to be released into the US market. There is however a risk of oversupply, although this may only affect gateway markets like Washington and New York. With regards of the office investment market, changes are expected to be minimal and demand for space in core markets will remain strong as long as short-term interest rates stay favorable.

Lastly, it is worth mentioning the impact that the new tech sector is expected to have on the US office market during 2017. In many of the nation’s gateway markets, new tech tenants are expected to overtake those in the financial and legal sectors in terms of absorption and take-up rates. Market forecasts from Colliers also suggest that in the medium term, this business sector could drive a surge in demand for large office properties.

This entry was posted on Thursday, February 2nd, 2017 at 5:05 am and is filed under Best Cities for Business in the USA, Office Space Forecasts and Trends.